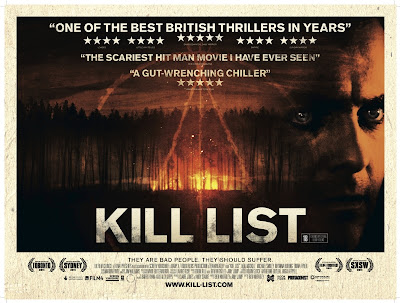 Kill List is a difficult film to categorize into a genre, as it has a myriad of elements from horror, drama and action, but overall I would categorize it as a very intense psychological horror movie. It follows an assassin turned family man by the name of Jay, who is pressured into taking a new assignment by his friend and cohort, Gal. As the nature of the task slowly unfolds throughout the movie, Jay becomes increasingly submerged into a trail of violence and confusion which lead up to a very memorable climax.
Does this sound familiar? Well, that's because it is, but it's a bit deceiving. Beyond the somewhat mundane premise, Kill List sets itself apart from the others quite easily. Wheatley maintains a very glum overtone where all of the relationships within the characters feel unsteady and ready to unravel at any moment. Kill List holds a calculated atmosphere that leaves you feeling uneasy from beginning to end as it slowly reveals details leading to some surprising conclusions. It's home to unexpected twists and turns, clever foreshadowing and bouts intense violence. I don't want to give away too much of this film as I think it's best served without much knowledge about it beforehand, but this is definitely one of the most surprisingly well-done films I've seen all year. Highly recommended.

Cody DeLarge
Posted by Guts and Grog Reviews at 2:27 PM