Beyond The Black Rainbow- Panos Cosmatos 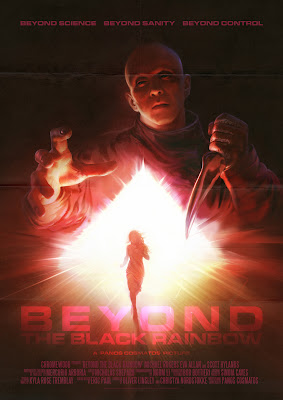 Here's the best description I can think of for this movie: If David Cronenberg directed his interpretation of Stanley Kubrick's 2001: A Space Odyssey with the 80's flare and soundtrack of Drive, then you would get Beyond the Black Rainbow.

That's really all you need to know. For some people that sentence will be exciting and for others it sounds terrible, and to be honest, it's kind of both depending on what you're looking for. Beyond the Black Rainbow is the film debut of director Panos Cosmatos and it's certainly interesting. It's vibrant, experimental, visually arresting, slow-paced, confusing, ambiguous and borderline pretentious at times, but it's definitely interesting. The story follows a girl named Elena who is held captive in a space-age 80's set called Arboria that looks directly out of a Stanley Kubrick film. Elena is heavily sedated and held hostage by a creepily monotone villain that is watching over her. Oh, and did I mention that Elena has a psychokinetic power to make your head explode a la Conenberg's Scanners? Well she does.

If this synopsis sounds confusing, it's because it is. It really doesn't shed much more light on the vague premise than that. Cosmos has chosen to take a style-over-substance approach to his film and I think it happens to work well. One spectacular scene in particular shows our villain downing a handful of pills while the wall behind him begins to melt like a bright red candle. It's scenes of visual imagination like this that make up for the lack of storytelling and characters in the story which makes it a pretty polarizing experience. If you enjoy films such as Enter the Void, 2001: A Space Odyssey, Moon, The Fountain, etc. that tend to shine visually more than logically then I would definitely recommend checking this one out. Being buzzed is highly encouraged.

Cody DeLarge
Posted by Guts and Grog Reviews at 12:09 PM