Thirstier Than A Child Molester In Hell: A Look At All Hell Breaks Loose- Jeremy Garner 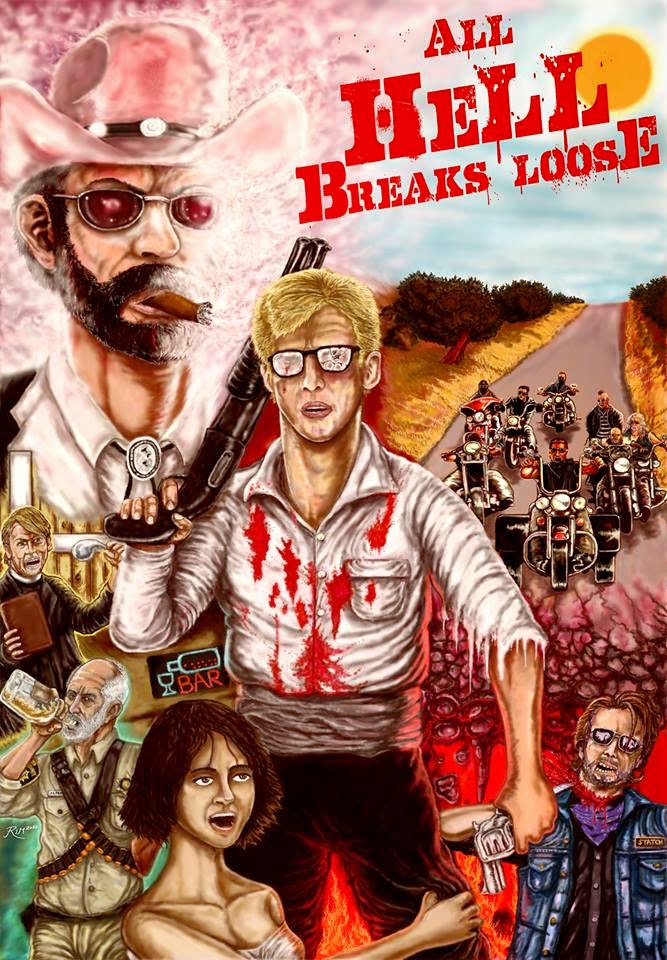 All Hell Breaks Loose starts off like a typical slasher. A bunch of drunk fornicating kids, sitting around a camp fire, telling local urban legends of psycho killers. Within minutes you are quickly informed that this is not the case. It was if the film itself came out of the TV, and said, "Hey, fuck you! You will find no Cropsey here. This is a brutal biker flick, and the Satan's Sinners will fuck you up." Cool, so it's not a slasher, it's a grindhouse throwback biker flick. Right? Well, not exactly.

After we meet the Satan's Sinners, who are the motorcycle gang from hell, we meet a young married couple headed to Portland. They just got married, and are ready to make it official. See, there has been no sinking of the pink, just yet. That is why these demonic bikers kidnap her, and kill her boo. If there is one thing I have learned over the years, it is that Satan loves virgins, maybe even more then the Scorpions.Luckily for them it's not over yet. A man I assume is God shows up, looking like Macho Man in a white suit, cowboy hat, and sporting a Sam Elliot voice. He resurrects our hero, who is ready to save his girl, and get his revenge. First he needs some help. So he gathers up a sheriff, a masturbating, alcoholic priest, and sets out for his lady.  You guessed it. All Hell is gonna break loose.

The above is a very simplified synopsis. I don't think I can capably put into words the fun, and insanity this flick brings. That doesn't mean I won't try. The thing to get out of your head right away. This is not just another Nu-Grindhouse flick. Sure, it is in some ways, and that doesn't have to be a good or bad thing. It is a potpourri of many genres, which in itself is not really anything new. What it all breaks down to, what matters to me. It is fun as fucking hell. I seriously had a blast watching this. I am a child of the video store generation, and AHBL takes the guts of many of the films that filled the shelves, put's them in a blender, then serves them to your dying mom, while you watch. It's fucked up, and funny at the same time.

It has brutal, exploitative, mean spirited moments that you might find in a film like "Tenenment," while also having the fun care free spirit of a Troma flick. It has some amazing effects. Some brutal gore, sure, but also some straight up nineties straight to video shit, and I mean that as a good thing. Think Full Moon, before they lost their Paramount money. Slimy, oozy, splatterific awesome. There is melting, exploding, and even old fashioned torture.

While definitely being a part of the new grindhouse movement, it doesn't rely on filters, and gimmicks.Sure, they are there in some capacity, but I promise you Robert Rodriguez had nothing to do with this.  I personally have no problem when those things are used, but it was refreshing to see a film that could have been made in the time period it is imitating. When I first turned this on, I expected to have a good time, but I thought I may have to make excuses for it. It's like if you fucked an aging scream queen. You would tell your friends, but you would probably show them her head shot from that film she was in, back in 1987. I assumed I would love this, but would have to pretend it was made in the eighties. Turns out, it's all very confusing. It's more like if you fucked that girl from "Orphan." You show your friends the picture, and they are probably disgusted, and confused. You just have to explain. It doesn't matter the age, or the year. It is timeless, and will look the same in 2014, as it did in 1987, and it is for you to decide if that is right or wrong. Me, I already made my decision.

-Tromeric
Posted by Guts and Grog Reviews at 3:53 PM