Jacob VonKlingele Takes A Look Back: 2012

This time of year, as I sit back in my faded lawn chair on my back porch and watch the endless rain of a Pacific Northwest winter. I like to partake in a fine, newly legal, jazz cigarette and reflect on the year gone by. What follows is a random list of the stuff I found interesting this year. No particular rules, just my rundown of what piqued my interest.

This being the Grog I figured I should start things off in the Horror world. Truth be told I didn't watch near as much new horror as I should have this year. A lot of it just hasn't grabbed me, that and I never have the time. There were a few goodies in there, like the beautifully bad Nazis at the center of the Earth , Abraham Lincoln Vs. Nazis, and my son's favorite 2 Headed Shark Attack. I really liked Beyond the Black Rainbow a lot, also. It was a nice mix of pretentious and weird that I dig. Plus, the score was fantastic. I did re watch a lot of 80's horror, with some fancy new releases of some great old stuff. Scream Factory in particular knocked it out of the park this year and looks to be doing the same next year. Plus I finally got the C.H.U.D. II and Ghoulies 3 DVD set and you can't go wrong with that. Which is a big part of the reason Father's Day was close to being my favorite horror movie of the year. It was nice to see a Troma movie done right, good inappropriate humor and fun gore. Another highlight for me was a last minute watch that I had been looking forward to for a long time. John Dies at the End definitely lived up to my expectations. I read the book earlier this year and loved it, but I wasn't sure how well it would translate to film. Luckily we had Coscarelli behind the camera and he made it work. Part of what doesn't interest me about newer horror is the lack of new ideas, but Cabin in the Woods brings something new to the table while going back to basics at the same time. Not a lot of movies can pull that off, with the humor and decent gore(minus some questionable CG) of this one.
That's why I'd put this at the top of my list this year. 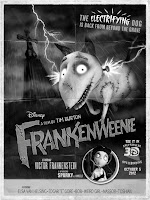 It was also a great year for kids horror at the movies this year. I haven't seen Hotel Transylvania yet, but Frankenweenie was really fun, especially compared to what Tim Burton shits out lately. Paranorman was easily one of my top movies this year. It's as close to a real kids horror movie as you're bound to get. The grindhouse style opening and the Halloween reference were fantastic, plus I can never get enough of stop motion animation.

Outside the world of horror was full of big blockbuster movies. Most of which more or less lived up to expectations, which is rare. It actually made it a little hard to narrow this one down. Obviously Avengers owned the summer, and with good reason, but some of the other guys made some decent movies. Ghost Rider and Amazing Spiderman both made for better than expected movies. Any time I can take my daughter to a movie for her birthday and watch Nic Cage act like a lunatic and slam some dude back to hell with his fiery hell chain is a win in my book. Hell, Dark Knight Rises even managed not to suck. It really comes down to two movies for me though, Prometheus and The Hobbit. Prometheus was amazing and very under rated in my opinion, the design of the movie is beautiful, but The Hobbit was just too damn good. I had an unreal amount of anticipation for this movie. I've loved the Hobbit since I was pretty damn young and this is the exact movie I wanted to see. Fun and epic at the same time, good humor, and amazing effects, it all comes together just right.

There were also some great smaller releases this year. Action movies in particular got some goodies. The Raid was fantastic and Lockout ended up being a really fun Die Hard/Escape from New York mash up in space. Dredd ended up being way better than I was expecting and out Raided The Raid in my book. There were ever a couple good laughs to be had. God Bless America was hilarious and The FP is easily one of my favorite movies of the year, or hell the last ten years for that matter. Looper was the real stand out for me though. I loves me some sci fi and holy shit did this movie bring the sci fi hard. Great acting, great story, and a cool understated “futuristic” design. 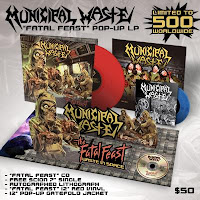 This year was a really light year for me as far as new music goes. Maybe I'm just turning into a grumpy old man that only likes music from “back in my day”, but there just wasn't much new music that really grabbed me this year. We got some really solid new albums from Testament and Kreator that are both worth a listen and 3 Inches of Blood decided to surprise me and make an album that I can actually stand listening to and even enjoy quite a bit. The two metal albums that spent the most time playing on my computer were The Sword's Apocryphon and Municipal Waste's The Fatal Feast. I'm not sure exactly what it is about The Sword that I dig because it's not my usual helping of Thrash metal and fantasy power metal I tend to listen to, but there's something about the mix of that old school Sabbath feel and more modern sounds that works for me. It couldn't compete with the straight up fun of a new Municipal Waste album though. They keep it true to old school thrash with a little hardcore peppered in there, and these days that's a rare find. Throw in a big heap of sci-fi/horror themes and you can't lose.

Over the last couple of years I have really started to get more and more into soundtracks and instrumental stuff. Even a little electronic music here and there, I know that's like blasphemy coming from a metal heads mouth, but I like listening to robot music, so tough shit. A great one I stumbled on this year was DROKK: Music Inspired by Mega City One. It's a score to a fictional Judge Dredd movie, that started out as the score for the new Dredd movie, by Geoff Darrow(from Portishead) and Ben Salisbury. If you dig the old synth heavy scores of the 80's then you'll love this. I just wish they would have kept this as the score for the new Dredd movie so it could have kicked that much more ass. My favorite album this year though has to be How to Destroy Angels EP An Omen. I love basically anything Trent Reznor does and this is no exception. Great ambient music, that I always have playing in the background while I'm working on my customs. It's a great mix of electronic sounds and almost acoustic instrumental work that sounds great with the low key vocals. 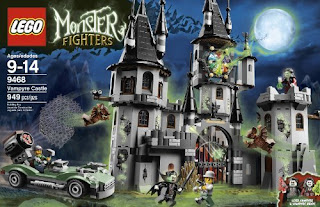 Lets finish this up with my favorite toys this year. Luckily for my wallet it was a pretty light year for toys. That's part of the reason I'm not doing my usual best of list for toys. There just wasn't enough to justify a list, especially when it came to horror figures. Neca continued their Nightmare on Elm Street line and it's still top notch. They also had a some solid video game figures. The real stand out from Neca this year is the Prometheus line. The Engineer in flight suit is easily the best figure I picked up this year. I've always loved the design of the Space Jockey and to have a highly detailed, surprisingly articulated figure is a dream come true for me. We also got some unexpectedly nice figures for The Hobbit. They're from a company I had never heard of, but they are some of the nicest smaller figures to come out from someone other than Hasbro in a long time. The likeness are spot on, as are the sculpts. The basic paint jobs are the only thing keeping them from being really stellar. We got some fun figures from Adventure Time and Regular show, but some iffy quality holds them back. The real highlight of the year for me was the Monster Hunter line of Legos. I was lucky enough to pick up the Vampire castle and the Ghost Train for X-mas and I love them. Nothing makes you feel better than sitting around in front of your kids selfishly building your Lego sets while they just watch. It makes you feel like a real man.

Well I'd better wrap this up before I keep rambling all night. Mixed with all this good there was plenty of shit out there. A bunch of garbage Hollywood horror movies and half assed action figures. And don't even get me started on the state of popular “music”. I broke down and bought my wife the new Ke$ha album and holy shit does it suck. I'll never understand what anyone sees in this hood rat skank, looking at you Tromeric.

All in all it was a pretty good year in the VonKlingele household. A few down notes, but that's to be expected. I'm looking forward to a new year and hopefully I can get off my lazy ass and accomplish some big projects this year. It looks like there's some great stuff headed our way next year, so I'd better get ready.

- Jacob VonKlingele
Posted by Guts and Grog Reviews at 2:56 PM

You got the Castle and Ghost Train for christmas!? I am one jealous motherfucker... believe me when I say that! I love LEGO and those two sets are my favorite of all time, but I don't got the cash for that sort of thing.

I don't know if you've run across the Death Waltz label yet, but it should be right up your alley. They reproduce classic horror soundtracks (Carpenter/Zombie shit). Good stuff if hella expensive to import.